If you walk in the hills much in Wales you will occasionally encounter a strange, unpleasant smell.  Your impulse, honed over myriad generations, will be to head in the opposite direction because it is the smell of death.  If you are inquisitive you may poke around with a stick while holding your breath and you will find the decaying flesh hanging from the still-articulated skeleton — there will be lots of interesting insects and if you look carefully, with your CSI hat on, you might notice the brambles wound around the body.

You see, brambles grab sheep — they wrap them in their tentacles and the more the sheep thrashes and twists the firmer it is held — it does not last long. 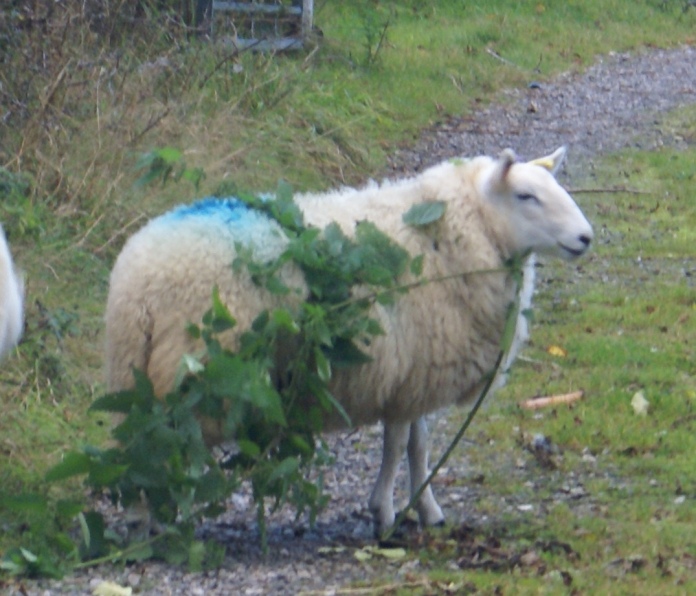 Don’t fret — most places are so thoroughly grazed that the blackberries never get a hold — it’s when the sheep sneak into places they are not allowed that the trouble starts — when they get into woods where they are not supposed to go.

Here’s Gladys (you remember Gladys — the floppy, pig-mouthed ewe lamb with teddy-bear ears who wasn’t prepared to die as everyone knew she should). She is still testing the limits of survival.  Her baaing has dragged us out of bed — she and her friend are stuck — doesn’t look impressive because they have already eaten all the leaves and the thorny twine that binds them is embedded in their thick fleeces but they cannot get away and have to be cut free and the prickly problem painstakingly unravelled with much kicking and wriggling — thank goodness they are not fully grown! 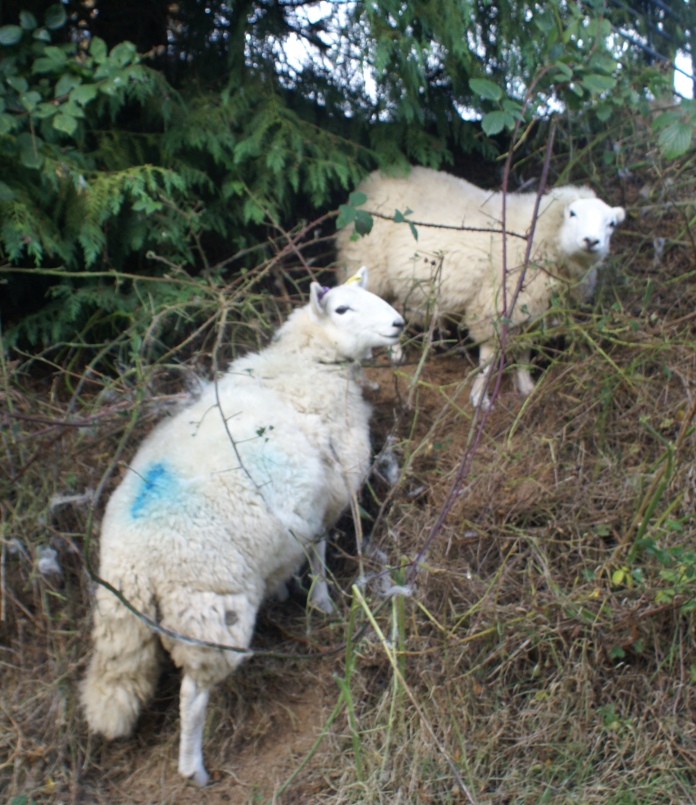 It’s a misty morning in Mid-Wales, the air is still and the leaves are silent and the weather has been unusually dry so even the streams are muted.

There is a distant sound of dogs beating distant woodland for foxes — there are no shots but the sheep are wary and cluster in the gully on the opposite side of the valley.

See how this landscape rises all around you carrying the sheep and cows into the tops of the trees.

At the edges of the wood where the tree canopy is less and bracken grows the first tentative frosts are turning the woodland floor amber and, as the giant branched fronds die back, the undergrowth of shamrocks, covered since May, bask anew in the pale daylight.

This is the season for fruiting fungi. 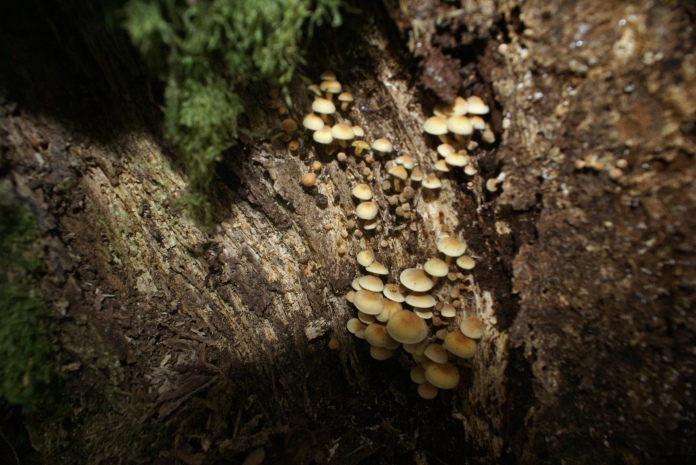 Soon the weather will change and a heavy frost will let loose the seasonal showers of  leaves that fall like snow and drift and swirl in the spicy air. For the time being they hang on.

He wasn’t a hero. 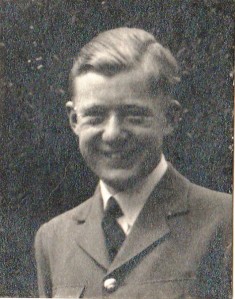 He was a bookish boy with an academic interest in anything and everything to do with flight – that’s flying not running away. His father and uncle had been World War One aviators – the uncle was a hero (MC and DFC) and died. The father, whose wits were very quick and eyesight very good, was not a hero but survived and after the war produced the boy whose eyesight was poor and who took after his mother who was of a nervous disposition.

When the next war broke out the boy volunteered for the Royal Air Force, not to fly but to serve in the RAF Regiment as an officer on the ground, building runways and keeping up, just behind the lines, with all the logistics of flight – that’s flying not running away.

Unusually for the time, he had spent his childhood holidays, between the wars, in France and while a bookish boy at Highgate School , had been paired with a German Jewish refugee boy (Gerard Hoffnung) – the one to learn English the other German – it worked.

On D-day +1, about a week after he had married my mother, a bookish young man who spoke French and German was running up Omaha Beach in Normandy under fire, soaking wet and more terrified than he could ever have imagined. His kit was lost and returned, rotting in sea water, to his young wife in London; the family thought he had been lost but she would not believe it (she washed his spare uniform repeatedly until it smelled fresh and she had had news that he was safe — well not exactly safe… He went on (with others) to fight through France, Belgium and Holland, where he lived with a young Dutch family facing horrible hardship.  Later he went on to use his languages (he’d added Dutch and a smattering of Russian), and his unit’s bulldozer to bury bodies, in Belsen.

Just when he thought that the nightmare was over (or was he really alive for the only time in his life) he was ordered to embark for the War in Japan — a war without the niceties of the Geneva Convention or Red Cross parcels, where capture could mean starvation or summary beheading.

He sailed through the Suez Canal and was half way across the Indian Ocean when the Allies detonated the atom bomb over Hiroshima (6th August 1945), and three days later, over Nagasaki; Japan surrendered; the war ended; my dad – Geoffrey Mitchell Buck (1922-1991), who was not a hero, survived and was re-routed to the North where, armed with a copy of the Koran and assisted by a Muslim bearer, he was seconded to the Indian Air Force to witness the partition of India and the death throes of British colonialism.

When I was a child my father used to scream in the night. Once he was showing me how to sail a dingy in Norfolk and I pointed out a duck — Duck! He threw himself into the bottom of the boat and went pale, with perspiration on his top lip. Then he got cross with me which didn’t seem fair at the time.

Last week I found and read a book of his (signed and dated 1947). It was Hiroshima by John Hersey, It contains first-hand accounts from survivors of the bomb – everyone should read it – it feels like a latter-day gospel about the sacrifice of people for the sins (and future) of others.