Last night, late, we arrived home from a weeks holiday in Cornwall so, only now, it is safe to mention the feverish activity that preceded our departure for the far south-west.  It’s not that we feared cyber initiated incursions during our absence; it is that we do not believe in tempting fate.

© Copyright Julian Dowse and licensed for reuse under this Creative Commons Licence.

Now we are back I can risk telling you that we were predator-proofing.  We struggled in the torrential rain to make the poultry fox-proof  and badger-proof before entrusting them to a friend to tend daily.  We erected 8 ft high double fences with embedded roof slates buried and wired around the base and heavy scaffolding poles also fixed at the base to discourage tunnelling.  Alan vetoed the purchase of electric fencing — God forbid — that is plan ‘B’.   Phase Two will encompass the netting roof which will be necessary when we have chicks — to keep out the magpies and buzzards (but I haven’t mentioned this to Alan yet).

The cats had not left home this time and were in-doors waiting for us on our return  — the one dubious benefit of heavy rain.

I immediately donned my wellies and went out to shine the repaired torch through the chicken-wire window of the new coop.  The chickens were on their perch, one with its head cocked quizzically to one side and a brown egg smashed on the floor beneath her — ‘point of lay’ but still hasn’t got the hang of it quite.

The ducks were also on the floor of the coop, carefully preening the last of the day’s mud from their feathers in a scene that reminded me of our bathroom on a  Friday evening when our five children, then teenagers, were still at home.

Outside the coop in the new predator-proof poultry run something strange has occurred — a 25 foot square enclosure of pasture has undergone some sort of cold fusion.  There is, it seems, a complication of keeping predators out and it is keeping poultry (especially ducks) in.  In one week, two ducks have carefully liquidised the chicken run.

They meticulously probe the soft soil for grubs and wriggly things, repeatedly washing their bills in any standing water they can find — puddly land becomes a morass in no time — they are very conscientious!

This morning, bright and early, I  counted the sheep huddled by the fence and found one too many —  that’s odd!

There was one stray sheep on the other side of the fence trying very hard to blend in with ours — they do so hate to be alone.

In this wet weather sometimes, in the dips, the tension in the wire fences lifts the fence posts right out of the ground and some of the ewes are quite clever at encouraging this process, particularly if there is nice grass on the other side.  This seems to account for our new ewe — she has been returned. 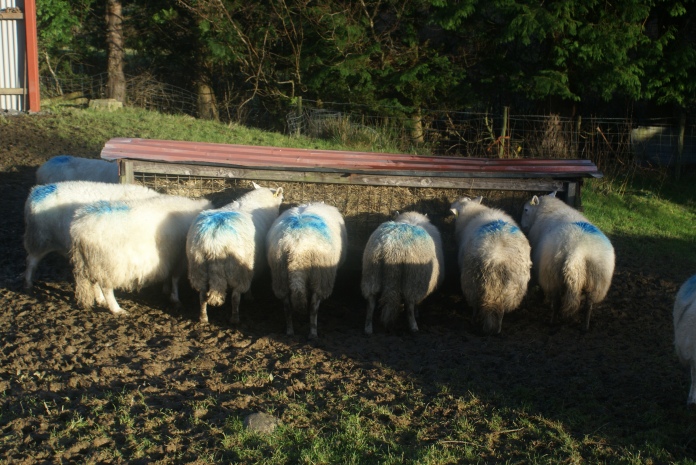 It’s Christmas Week — it’s still raining and we’ve had record high night-time temperatures.  The grass is still growing, albeit slowly and the sheep who are usually complaining that they need concentrate by this time of year are not even bothered to lick the Rumevite block I put out for them.

And now, the first buttercup of spring;

it’s as if the shops were full of hot cross buns and Easter eggs — where will it end?

Our stream in summer

The exceptional rains continue, the ground is saturated, the reservoirs are overflowing and the rivers are in flood. It’s worse further north and it’s bad enough here.

Last week, unusually for December,  I saw a Dor Beetle on the path — moving to higher ground, I thought, ahead of the flood.

Just in time, as it happened, before water started to spew out of the burrow.  In the valley bottoms the water table is higher than the ground so mole hills erupt with water, like volcanoes, and if you stab the ground with a stick it may spurt at you.

Water is running everywhere.  Waterfalls appearing where they do not normally belong. 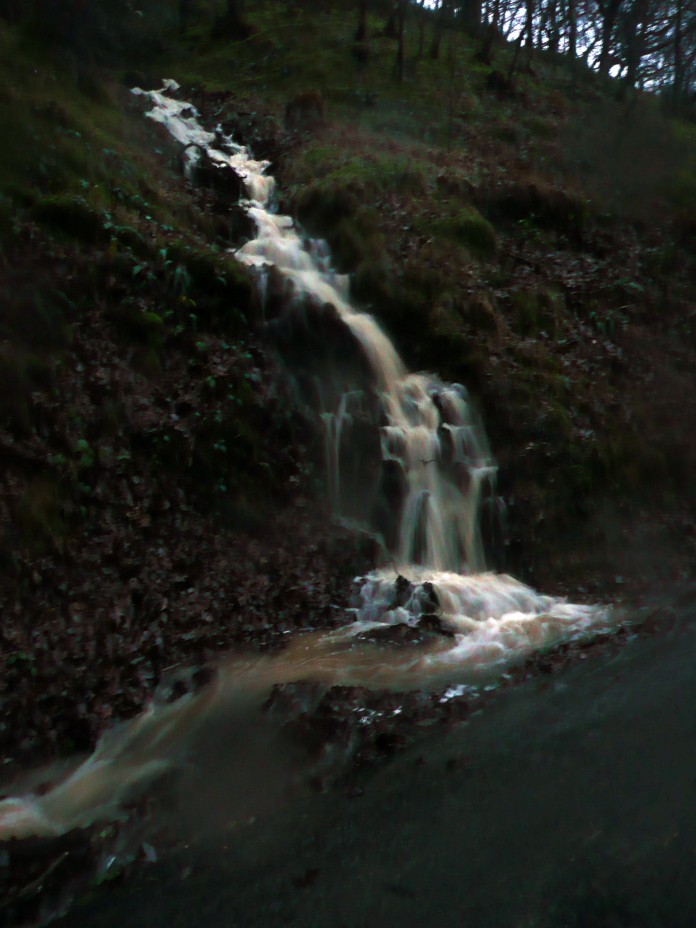 At dusk this evening the chickens put themselves to bed but the two ducks were nowhere to be seen. They weren’t in the sodden field, nor in the yard, not under the truck and not in the barn or in the road which has turned into a torrent. 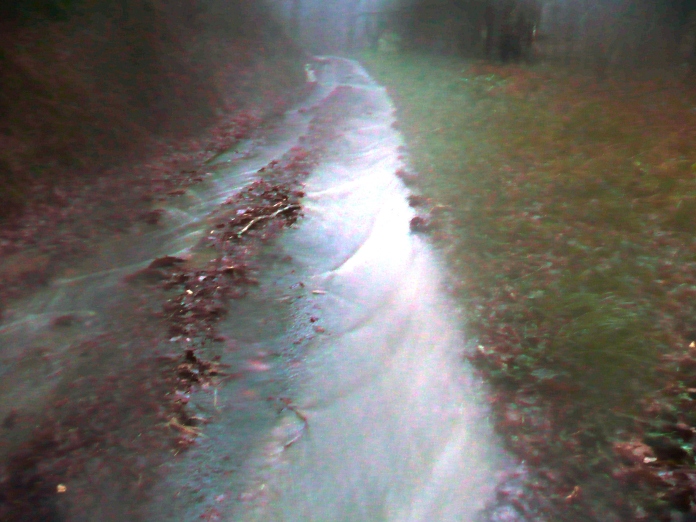 Way to a neighbours house, cut off by stream

The torch wouldn’t work and the hurricane lamp blew out, but somewhere, above the storm, there was a distant quacking.   The two ducks had strayed into the wetland (well — it’s all wet at the moment) and become separated and were calling to each other over the stream.  As I approached through the aspen and alder, one panicked and tried to cross the raging stream (remember, their wings are clipped), next minute she was in the churning, muddy water, whizzing downstream, spinning and flapping, quacking and squawking.  I was downstream of her so, holding on to a tree, I managed to lunge at her as she approached and flip her unceremoniously onto the muddy bank where she disappeared into a holly thicket before I landed, splat, where she had just been.  Traumatised (both of us) I carried her home over the bridge and reunited her with her friend, who came running to meet us.

Tomorrow, I think they had better try their new enclosure — it’s too rough for ducks!