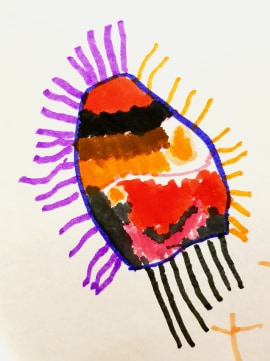 This is Emily’s picture of the corona virus – the reason we can’t see any of you at the moment .

But here are the pictures of what Bill and I have been able to see this week.

This flower is called fritillary too — it’s very rare, we’ve only ever seen this one and it was a bit wilty.

Tom likes butterflies. This is called a pearl bordered fritillary. Can you guess why? Fritillus means chess board in Latin.

Here is a red admiral, should have been called red admirable because he is so beautiful but somebody couldn’t spell. Georgia is a good speller

Sienna and Riley would like to try and catch this grasshopper — gently! We think he is called a common meadow grasshopper because he is common and hops about in the meadow — that’s how most things get their names!

What would they call you?

Emily, have you ever seen a large skipper like this in Cornwall, they like bramble flowers but you have to look carefully — they aren’t very large but they are bigger than the small skipper! That’s a bit like life!

This skipper is laying an egg!

Can you see it?

Sylvie, I expect you have seen one of these, they have spots called eyes — like the ones on the tail of a peacock so it is called a peacock butterfly. But when he folds his wings he looks black.

Here is a little one for you, Lucy — it’s a small heath butterfly. It is very skittish and sits on the grass so you have to lie on your tummy to photograph it and as soon as you get down to his level he flies away

This is one Rhys saw last year in the woods near his house. Do you know what it is?

We haven’t seen any ladybirds this year yet, the aphids which they like have not hatched yet. Rhys counted 68 in Peterborough. But we did see this ruby tailed wasp when we were painting the house. He has a fluorescent pink bottom — very scary!

Lucy and Zac, look what Bill found when he went pond-dipping.

This is what he found — It’s the little newt called palmate. This is a boy one — you can tell by his big back feet.

This tiny little butterfly is the green hairstreak — it is quite common on gorse but is easily missed. Old men hit gorse bushes with their walking sticks because they are looking for these.

We saw the first small tortoiseshell this week, not counting this one that slept on my bathroom windowsill all winter — I carefully didn’t clean around it.

We haven’t been out today because it is raining but spotted a bunny on the lawn. Bill went out to photograph it for Ben.

You can put your answers in Comments or on Facebook. You are not too old for this, Keira!