It’s all down to the Jet Stream.  It’s not a media construct, concocted by those who pull our strings to add weight to the recent climate change demonstrations — to boost the low-carbon economy and bolster sales of renewables.  In fact the media haven’t even noticed that parts of the UK have dropped from sight — at first just soggy then gone — submerged. 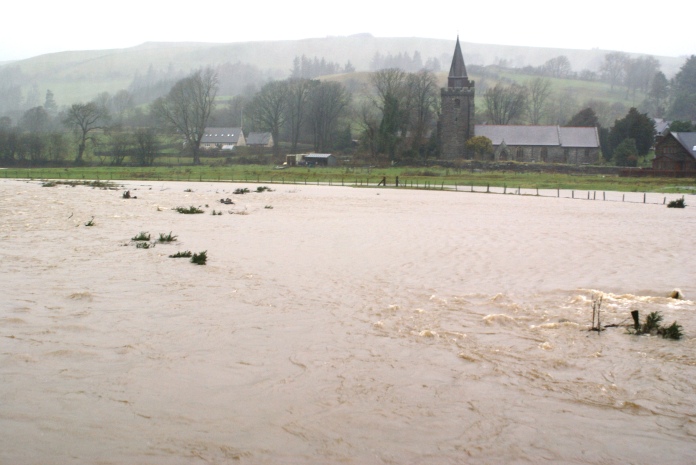 I  can’t quite work it out — it’s warm and the grass is growing but it just won’t stop raining — I know it’s Wales but it’s poured, unremittingly for three weeks — 260mm and 60 of those in the last 24 hrs — and if it slips any further ( the Jet Stream, that is) it will all be snow and we’ll be living in Canada… 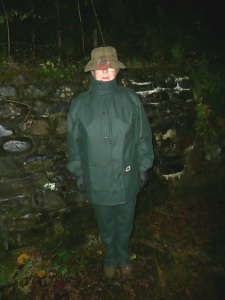 We’ll need a skidoo and not just new industrial water-proofs.

It’s not just the media that has been pre-occupied with more momentous events — I only noticed when I went out for some milk and had a Dr Gloucester moment.  Splashing through puddles in my little car, it suddenly felt as if I were driving through treacle and the outside world disappeared under the wave that enveloped the windscreen.  Where was the road? 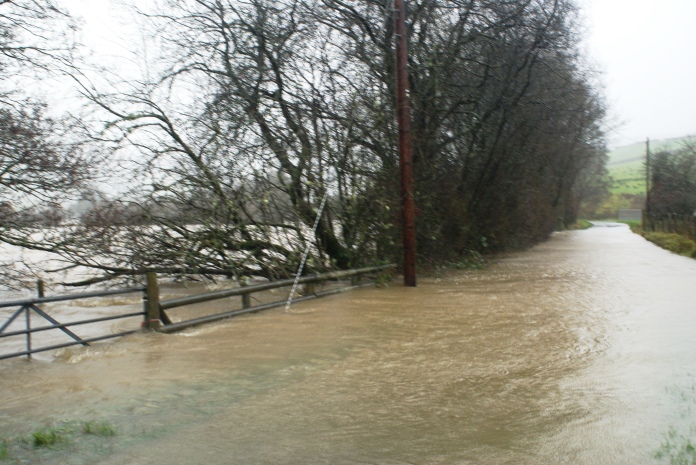 Today on the back-road from Llangurig to Llandrindod Wells.

It reappeared only to disappear again almost immediately as I realised that I was wearing the wrong vehicle — I went home and changed. 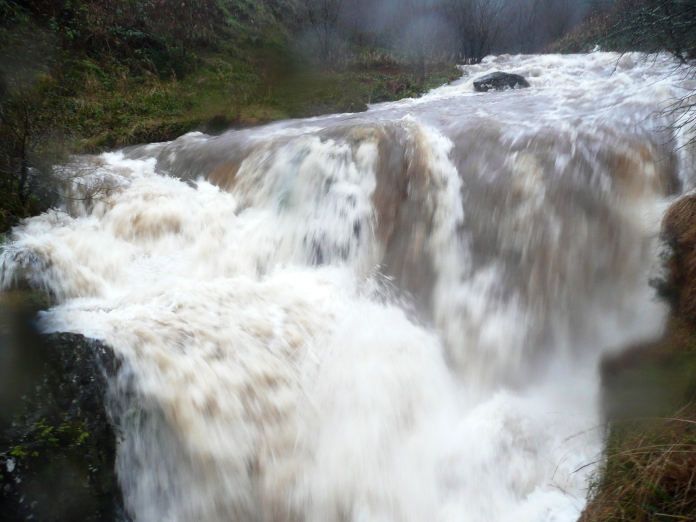 Severn Break-Its-Neck, today, about 3 miles from the source of the Severn.

Alan put on is red woolly hat and we set off in our truck to intrepidly go and be amazed by the awesome power of water.

Everywhere sheep were damp and disgruntled. 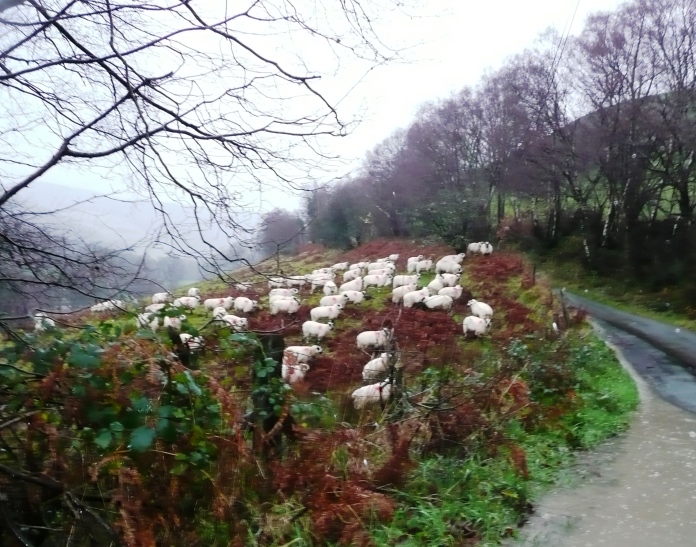 In Staylittle (Stay-a-little as it used to be called and which is a much better name) the water was rising. 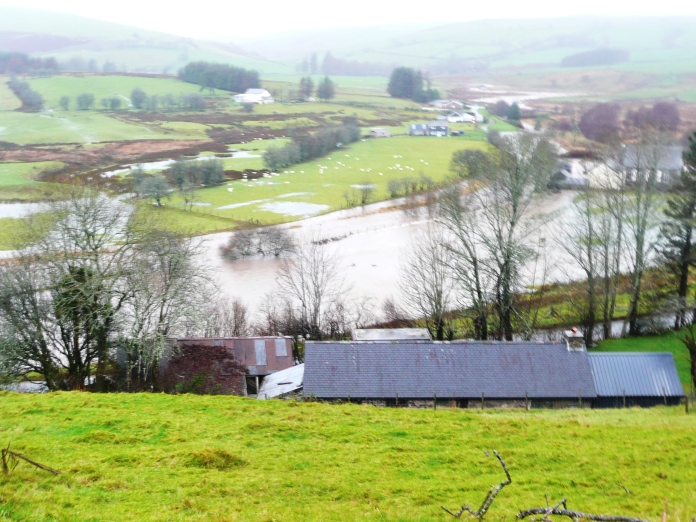 By the Clywedog Reservoir, used to regulate the flow in the Severn, men from the Water Authority watched.

I’ve told you this before, but you probably won’t remember: the Wye and Severn rivers both start within about a mile of each other on a hill just up the road from here.  Llangurig is the first town on the Wye and Llanidloes is the first on the Severn. 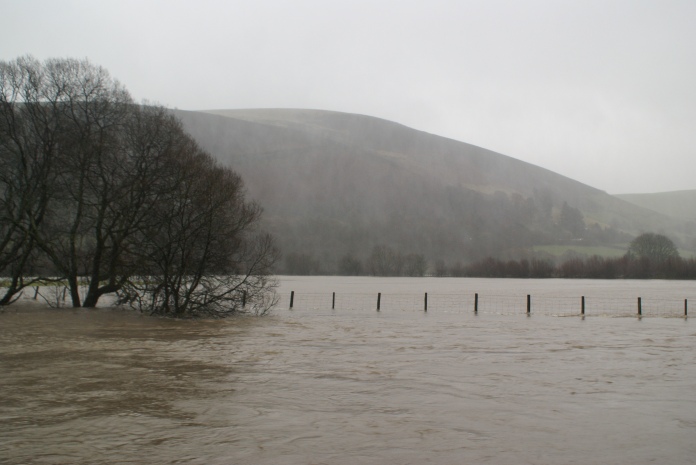 Wye Valley near Llangurig about 6 miles from source 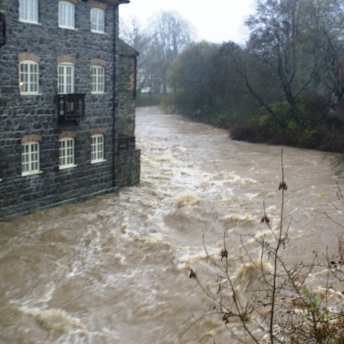 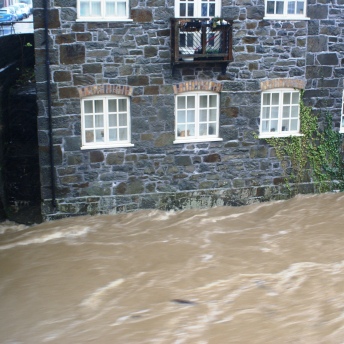 Both these towns are very near the sources of their rivers which go on down their respective valleys gathering volume and momentum — we have never seen them rage so much and so soon and so we fear for the communities downstream.  Today, while I was taking these photos of the river by the Old Mill, I met the architect who was looking at the flats, converted about ten years, and he told me that he had never known the arch (which you can’t see — but you should be able to see) to be submerged completely before.

It’s all a bit worrying — the rain has stopped now but everywhere roars with draining water. 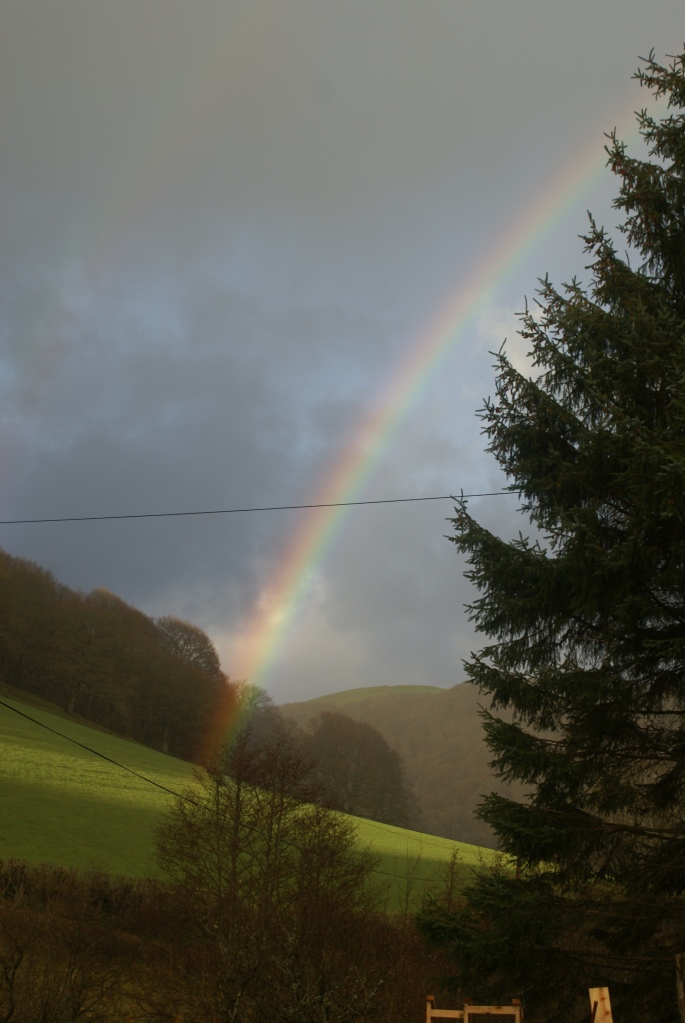 It is the mating season…  For trampolines — a male bowls across the hillsides looking for a mate, tumbles down the bank and leaps over the hedge.  He bounds down the slope then soars on a powerful gust, trailing his long netted plumage as he hurls himself down the valley.

The wind moans high above our house– we are in the lee of the hill.  It was built where the sheep sheltered — in the 1840s they noticed those things.  I noticed the tall trees at the end of the house flailing about in the turbulence of the mounting storm but Alan wouldn’t sleep in the spare room at the other end of the house — out of the reach of falling branches.

In mitigation for my cowardice I’ll tell you that two branches of Douglas Fir did fall, crushing a steel hurdle but missing the rotting old chicken coop, home to our precious new domestic fowl.  The old coop has been gradually sinking into the mud in the last week as the rainfall has reached 109mm.   It’s been a dry summer and autumn — ever since I started measuring the rainfall — only 718mm since April (believe me — that’s not much) so we know we are in for a deluge — a couple of meters, at least! 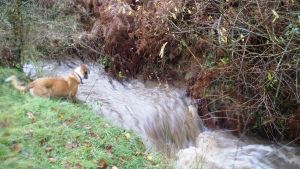 As we obsess about our perennial preoccupation another storm hits Europe…  A different sort of storm.

We watch our television and we catch sight of four people hunched over a coffee table at the edge of a crowded room full of milling men in smart suits and the occasional power-dressed woman.  We are looking anonymously down on a room at the G20 and upon President Obama and President Putin and two interpreters.  Did you see it?  Their body language says it all — in a bubble, in a crowded room, they are straining to concentrate, to hear and to really understand each other.  It is so contrary to their normal stance that it is shocking.

Here, back in our world, a man is startled by an unfamiliar shadow, he looks up into the great oak tree on the edge of his yard to see a skeleton hanging, draped in a black cape — it is the spent trampoline — like a giant dead crane fly. 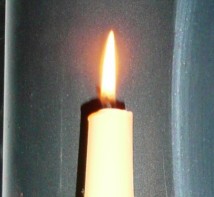 Click here  — An End and a Beginning  — for the story of the end of WW2 in Mid-Wales and Japan recently published in PenCambria.

We live in the Northern Hemisphere, that means, as I write, it is autumn. 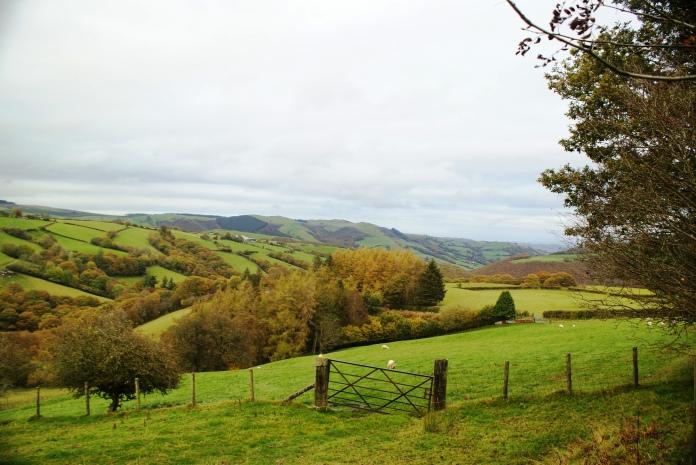 In Britain we do something very strange in autumn.  We turn back our clocks an hour, to give us more daylight in the morning and less in the evening (is that right?)  It started in the war when someone decided to put the clocks forward in the spring giving us long balmy summer evenings in which to ‘dig for Britain’ and increase agricultural production.  Ever since we have been moving the clocks back and forth and generally confusing ourselves.

Last week-end was the time designated to move the clocks back (we are all supposed to do it at the same time) —  not that  the hours of daylight are impressed — they have continued to dwindle along their inevitable celestial way, getting shorter and shorter, leaving less and less time for the farmer’s chores, and we have to cope with the disturbance in our routine wrought by the hour change — waking too early, hungry at all the wrong times,  confused animals, missed liasons, getting to the dentist at the wrong time and general discombobulation.

I blame this for the chicken incident. 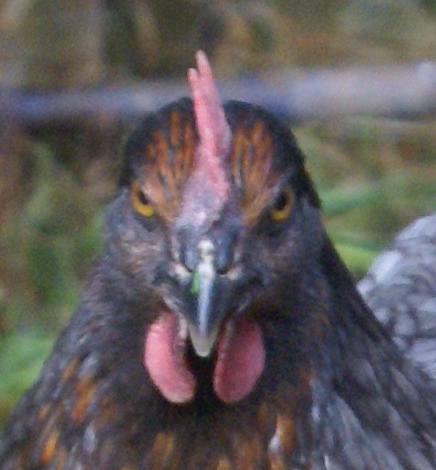 ‘Point of lay chickens for sale’

Now anyone who knows anything about chickens knows that they stop laying in winter, which in the Northern Hemisphere comes shortly after autumn.  The purchase of chickens at the point of lay in autumn is pointless — they, the chickens, will quite likely be eaten by hungry preditors during the long, dark, eggless winter months and you will never see the fruits of your investment.

Note to self — buy chickens in spring.  But sometimes one just wants to do something extraordinary. 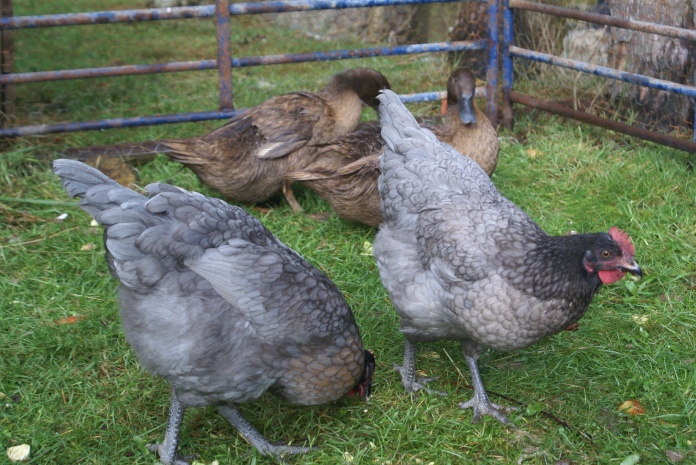 Those astute amongst you will have noticed something strange about two of them.

We did not lose our powers of reason entirely in Rutland — we noticed the huge pile of eggs on a box in the corner of the strangely muddy yard — duck eggs.

‘Oh yes,’ said the lady, ‘very good layers — our ducks, and they go on laying through the winter’.

So instead of four hens, we drove home with two grey hens (a Speckled and a Bluebell) and two Khaki Campbell ducks, shut in the boot of our camper-van.

We learned something new almost immediately as strange smells emanated from the rear of the vehicle unsettling the dog — ducks, unlike chickens, do not evidently switch off automatically when placed in the dark, they can see in the dark and they can squeeze through surprisingly small holes.

When we got home we had two chickens but no obvious ducks.  After the removal of several panels, the mattress, and parts of the bed we found them, gone to ground, between the water tank and the chemical toilet (obviously not liking to pooh on the plastic sheets and newspaper that we had put down for them in the boot).

This week, while I shampoo the camper van carpet, Alan (partly culpable) has been constructing a new pen and coop for the production of the most expensive eggs known to man.

Meanwhile I have a nagging worry about the ducks — raised commercially from day old chicks in a yard with only shallow trays of water and small puddles and without the benefit of proper parenting, we may well have to teach them to swim.  Life is full of new challenges…

Just now the chicken alarm went off — clucking wildly because two buzzards were making a low reconnaissance flight over the temporary poultry pen — I, but not the dog, was out there in my pyjamas in a trice.

Where had I got to?  Getting to know ducks.  They have laid 9 eggs in just under a week and are very meticulous with their ablutions taking a good hour to do what Granny called ‘a stand-up wash’ every morning  then they flap around drying their wings. 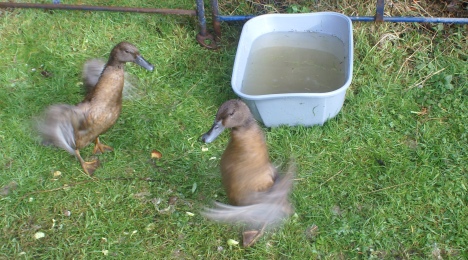 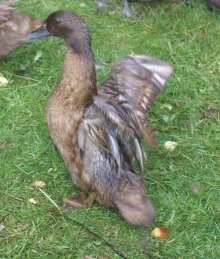 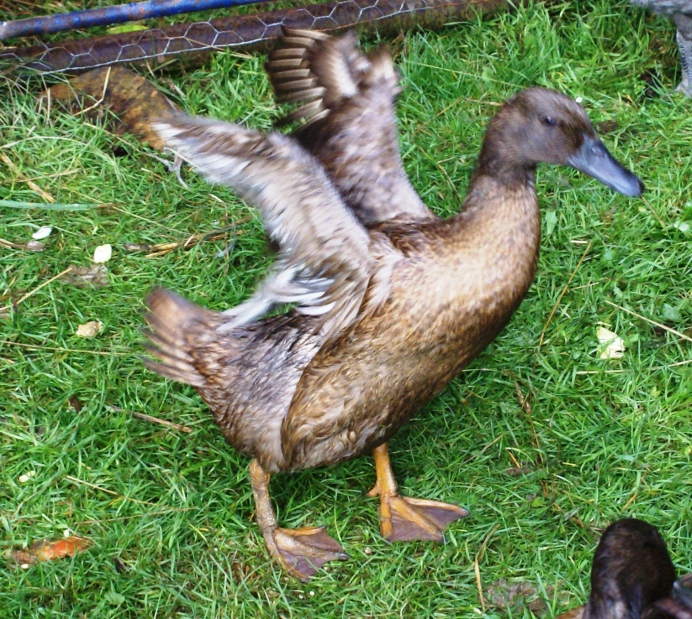 They are very easy to herd, which is good, and although they are not supposed to, they put themselves into the coop at dusk with the chickens, even though they don’t seem to like them very much.

Once the new coop is finished we will start on the floating pontoon for the duck-house…   If they can swim!