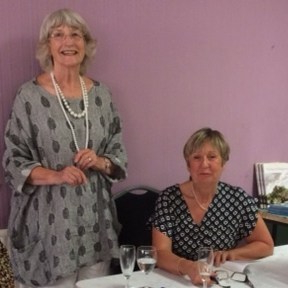 That, according to my daughters, is how you do a book launch — but that seems to be what they would recommend in any number of situations (where did I go wrong!)

Anyway — it seemed to work. We launched Iolo’s Revenge locally on Saturday.

It was carnival day and the streets were decked with flags and the numerous pubs overflowed with revellers in fancy dress.  Having an artistic director of our own helped — Wendy, the artist who illustrated the book, and who goes to lots of private viewings of exhibitions, colluded with bunting, flowers and colourful napkins.  She also exhibited some of her original artworks that head every chapter.

The previous night I had fallen from the kitchen work surface while retrieving a jug from a top shelf — the jug was smashed but I survived, stiffly, despite the numerous tellings-off.  Alan’s son, Daniel, saved the day, by putting out the chairs and remembering all the things I forgot in my percussed and anxious state — including the TV for the silent film show that had taken me weeks to prepare.

There was a good turn out on the night — about 100! There I am, above, talking to some of them.  The readers: Libby, Alan and Gay did us proud.    The guests all laughed in the right places!

Wendy posing with Su and Richard Wheeler,  of Logaston Press, taking a break from selling books, while I catch up with the signing!

Copies of Iolo’s Revenge are obtainable from Logaston Press

‘They’ll do!  They are the ones I want’, said the old farmhouse, probably in Welsh, and the couple (the ones the old place wanted) were drawn into the life of the place — inspired by its beauty, its creatures, its moods and its stories.

My book, Iolo’s Revenge, Sheep Farming by Happy Accident in Mid-Wales, is published later this week by Logaston Press.  It tells of the abduction of an orderly, retired couple from Northampton to the heart of Wales.

They accidentally buy a derelict farmhouse and almost immediately are adopted by Pedro, a wayward hound.  They had been winding down for a quiet life when suddenly they are climbing on the roof in the midst of a terrible storm, grappling with a homicidal, mechanical digger and wrestling with a huge pregnant ewe in a freezing stream in the middle of the night.

They had never had any inclination to move to Wales or practice extreme farming, nor try to learn Welsh –yet life just takes over and before they know it they have discovered a sense of belonging and community lost since childhood.

Iolo’s Revenge is illustrated by Wendy Wigley, a local artist who shares our love of the Trannon Valley and it’s often incongruous images!

The Windrush Babies is a new book written under the pen-name CB – and yes, it does ring a bell! The Empire Windrush was that boat that brought the first Caribbean immigrants to the UK in 1948 – you’ve seen it on newsreel clips.

I discovered it when I sat next to CB on a long distance bus recently – National Express is a marvellous institution for broadening one’s experience, unlike trains, people talk on buses!

We talked all the way to Birmingham (pity the man behind, trying to sleep) – what an interesting young person (not the man behind). Just before getting off, for the connection to Chester, CB mentioned the book – “it was in my head and I just had to write it – but it’s written now and I’ve put it up on Kindle and we’ll just have to see what happens!”

No launches, real or virtual. No interviews on local radio, no Facebook campaign but it’s out there – on Kindle, which is much easier than I thought – it seemed to be free but I don’t have a Kindle but it didn’t seem to matter – I paid my money (£7) and got a link to the Kindle Cloud on which I clicked and it took me to the right page and I read – simple!

And it’s a simple story, The Windrush Babies, but with a complex and powerful emotional punch. It’s anecdotal, light, amusing but builds to an awful truth. It’s a child’s view, a study of the human cost of migration and never has it been more relevant. Don’t be sniffy about the odd formatting idiosyncrasy or stray comma – feel the narrative.

It is full of contrasts – written with Jamaican dialogue and a scholarly vocabulary. There is blind selfishness rubbing shoulders with the ultimate in self-sacrifice. It is a celebration of family and of mother-love, riddled with foreboding – you really should read it. I would hate it to go un-noticed!

Thanks to UlyssesThirtyOne for the header image entitled ‘When the World is Against You’. (CC BY 2.0)