We are not in a war zone but over the undulating landscape of Mid-Wales fighter aircraft of the Royal Air Force rent the sky and intertwine their parabolas as they pass behind the hills to emerge and cross, one with the other with micro-second clearance — they travel in pairs, weaving like mating dragonflies on amphetamine, never quite making contact, thankfully — so far. 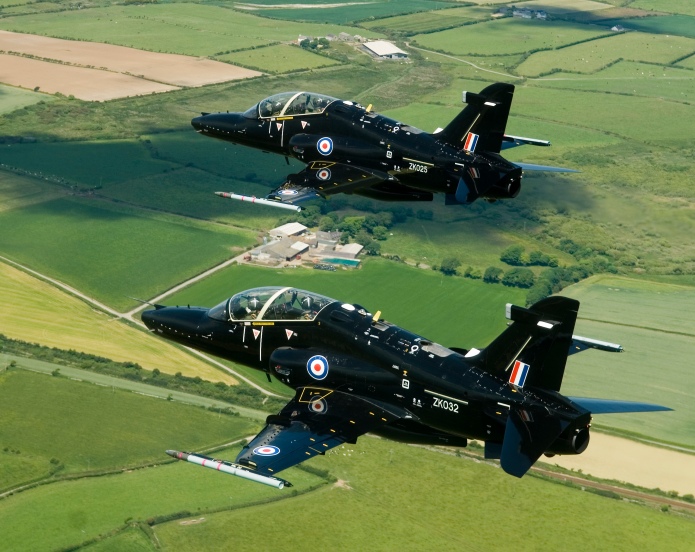 They use this area for low level training (I don’t think it’s a secret) and use our house as a landmark or perhaps we are located exactly on the intersection of the invisible lines of the virtual grid that is projected onto the land by a NASA satellite  (the eyes in the sky).  When we were slating our new roof the eyes in the sky were obviously interested, sending fighters to make pass after pass over our house, lower and lower in the sky, trying to topple the large khaki penguin, wrapped up against the elements (it was winter — we do everything late).  Were we part of a secret military exercise — a pretend enemy missile installation under construction — subject to constant aerial monitoring and due for annihilation when we fixed the last ridge tile?  Or was the intelligence officer just keen on DIY, trying to see how we feathered and leaded the valley of our new roof?

Anyway we enjoyed the attention.

We’re not paranoid, not even when a massive Hercules transport plane hoves over the horizon which, in these hills, can be just yards ahead.  Motorists on the mountain road swerve to avoid the huge alien craft that rears up as they approach the crest of a hill!

The remains of a fuel tank from such a plane was in our barn for years, jettisoned by a pilot who misjudged the height of our hill, and quickly squirreled away by conspirators to fill the oil lamps of this valley for a generation — or so they say!

The aerial activity recently has been more pastoral.  The crows that roost and build their nests in the wood do not like the buzzards, nor are they very keen on the red kites — 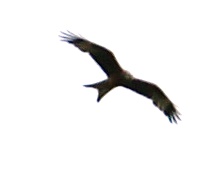 — that swoop down from great altitude to pick up the remains of pheasant carcasses left on the hillside for them by this lazy farmer’s wife who is fed up with making soup.

The buzzards are ever present, 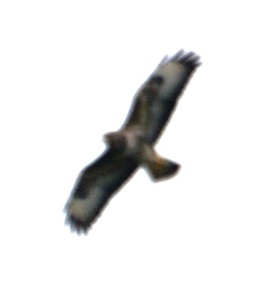 mewing to each other and circling above the trees and crossing the valley.  The crows are intelligent and social creatures and resent this invasion of their airspace so have formed an air force of their own.  They  climb up high in ones and twos and swoop down on the buzzard from above and behind and the buzzard will twist and roll to face the enemy with his talons outstretched and they will engage and drop and spin in the most aeronautically alarming way — a real dog-fight.

They recover and the buzzard continues to beat his Herculean way across the field of combat as the crows re-form to attack again. 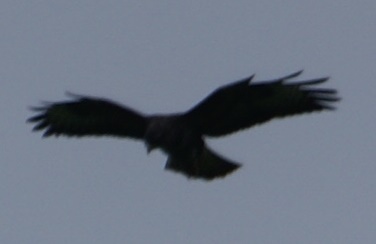 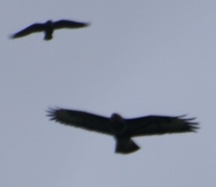 Crow about to swoop on much larger buzzard

It’s hard not to sympathize with the plucky crows especially after the chicken incident — imagine our delight when a great bird of prey alights just under our bedroom window to consume its prey — we are honoured and watch and wait, enthralled, to photograph its every move and later rush out to examine the spot — only to discover the remains of our last bantam hen! 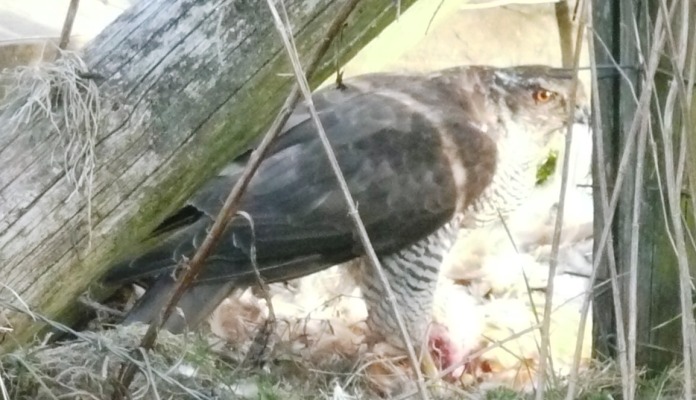