Just two years ago we put the bung into the plug hole of our newly dug pond and let Nature do the rest.

Last summer this Common Hawker Dragonfly patrolled its banks and skirmished with intruders for the territory, occasionally looping the loop with a yellow spotted female of his species who must have gone on to lay her eggs in the water, because look what we just found!

And that wasn’t all — the water is alive with biological activity, a million tadpoles whizz around our pond-dipping bucket, getting in the way and obscuring our view of the newts and myriad nymphs — not so easy to identify in life because most of the pictures are of exuvia (the dried up skins of the nymphs, abandoned by the adults after they emerge).   The harder you look the more nymphs appear and all are interacting — some snapping at passers by, others knocked over by a clumsy water beetle — a microcosm.

Blue and Azure damselflies are tricky to distinguish — especially when they are alive!

And what about our friend Libellulia depressa, the Broad Bodied Chaser, the first Dragonfly we spotted by the new pond (often the first to colonise a new pond, said the book, and they were) — 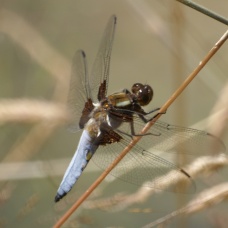 I think this could be one of his offspring

Please comment if you think I am wrong in any of my identification — I may well be, but you have to start somewhere!