It could cost you an admirer!

I once had a very high opinion of a man for whom I worked, in a lofty Victorian hospital with what they now call ‘orangery windows’ in the roof of the long ward on the top floor. One day a bird that had strayed into the ward became trapped, flying up against the glass of one of these windows.  His frantic tweeting was disturbing the ward and distracting the medical students that my boss was trying to teach — it didn’t take much to distract a medical student.  Now, I knew he was an enthusiastic bird-watcher and early tweeter (nothing to do with Twitter — it was long before that).  Perhaps I thought I’d impress him.

“I’ll get the pole and let the bird out!’ I said and went to fetch the thing like a giant boat-hook that opened the sky lights.

When I came back, they had moved along the ward, nearer to the bird and could see the flapping, squawking creature more clearly as it threw itself repeatedly against the glass in panic.

Crash!  There it was, shattered on the ground — not the window — not even the bird — but my shattered illusion — my respect, in shards on the floor of a paeiatric ward in North London.

Later, when the previously wise old patriarch, now demoted to a racist tyrant, was having his coffee, I went back and released the bird.

I remember this because it is the time of the year when flocks of these enterprising and social birds ‘graze’ our fields looking for something, I’m not quite sure what.  They alight (several hundreds of them), making a great stain on the hillside, chattering. 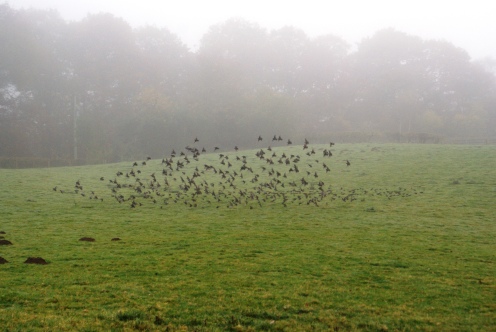 Then they lift in a swirling cloud and swoop low over the pasture scattering the sheep  who are scared, they are convinced that this murmuration of birds is supernatural. Suddenly the cloud swoops into a tall tree, all talking, so that the Douglas Fir twitters with an invisible din.

Then they are off again swirling, the ball of birds, tumbling up and down the valley, in and out of the morning mist, like a great ball of the lightest, flightiest, celestial dough, rolled back on itself and kneaded by an invisible force.  A splash of dough lands on the overhead electricity wires, then drips, bird by bird, back onto the grass.

All the time more and more individuals are joining the throng then, suddenly, they are gone.  All that remains is the throb of a thousand wings as they pass overhead, there is nothing like it — perhaps the sheep are right!

Have a look at these murmurations: http://essexnaturalist.wordpress.com/2014/12/29/starlings/