This ewe gives no hint that she is labouring until the last few minutes.  This morning she pushed out a large ram lamb just as I was feeding the others — I could see the lamb moving but by the time I got there things were not looking good — I pulled a great wadge of membranes from his throat but he did not react.  I swung him and pressed rhythmically on his chest.  I blew in his nose.  I even gave him mouth-to-nose ventilation (I really shouldn’t do that) but he was dead.

What a waste!  What a blow!  Fifteen seconds earlier, half a minute perhaps and it would all have been different.

I started to take the dead lamb away and the ewe wailed — I put it down again and thought, I wished she could have a live lamb…  Then I remembered! 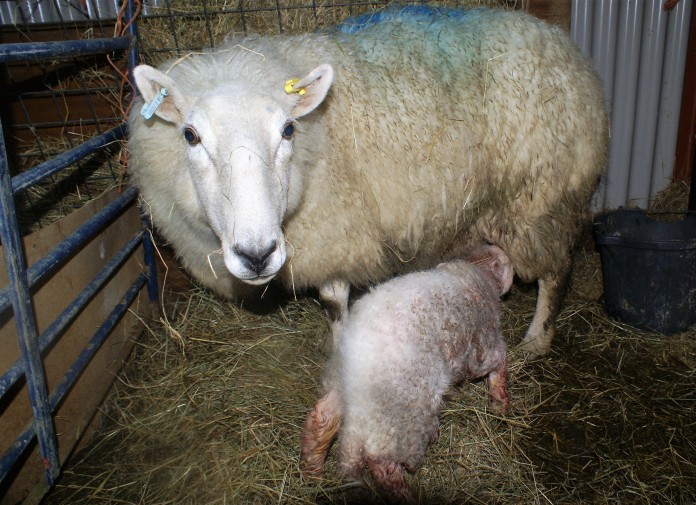 Here she is a few hours later with her new lamb. (Can you spot the deliberate mistake!) He’s wearing a sheepskin overcoat!

Thanks to two neighbours this little orphan lamb now has a healthy young mum with lots of milk and the ewe, well, she is none the wiser.  Her lamb that would not move, nor baa, nor feed, that lay in the pen unresponsive to her pawing was taken away for a moment by the big man who comes in the red truck and the next minute her lamb was right as rain — so right, he has two tails!

A little deception and the application of an old country skill and the dead lamb was skinned and the skin with all its associated love is transferred to the orphan (acquired from the other neighbour) and everyone is happy.

Pink rinse from being rubbed with placenta and mud from earlier pawing.