If you stand on a bridge for long enough around here someone will come past who will stop to bemoan the passing of the fish.  They will tell you about the trout they tickled in childhood and the salmon their grandfathers netted when times were hard.  They may also tell you how they outwitted the game keeper in their youth.

The only trout we’ve seen in our stream, that was more than an inch long, arrived in a bucket taken from the boot of a car, caught elsewhere by a friend’s grandson and rehomed in our stream, never to be seen again.

Now, we’ve just acquired a trail camera which we’ve placed by the stream in an isolated open area (most of our stream has cover) and guess what the first thing we spotted was — not an otter (sadly)

but a mink who appeared to be (guess what?)…  Fishing! 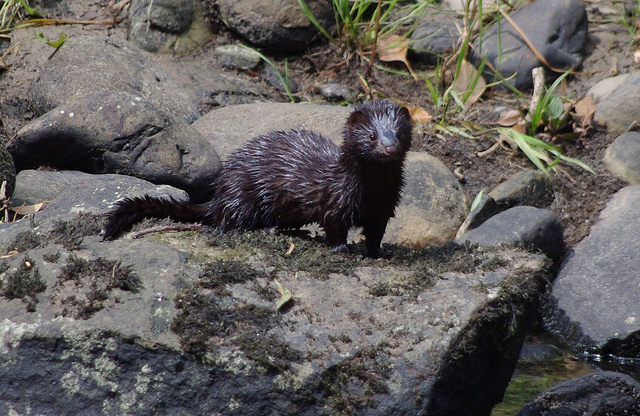 Lots of the streams in this area have pasture right down to the water’s edge so that any fish that there might be have no cover from overhanging vegetation which is what they need to hide from these dastardly predators.

The problem is what to do about it.  Bring back the game-keeper?  I know what he’d do!

The predators that the game-keepers used to kill are perhaps more common than we thought — we just don’t get up early enough these days to see them.

4 thoughts on “The Mysterious Case of the Missing Fish”