It’s Christmas Week — it’s still raining and we’ve had record high night-time temperatures.  The grass is still growing, albeit slowly and the sheep who are usually complaining that they need concentrate by this time of year are not even bothered to lick the Rumevite block I put out for them.

And now, the first buttercup of spring;

it’s as if the shops were full of hot cross buns and Easter eggs — where will it end? 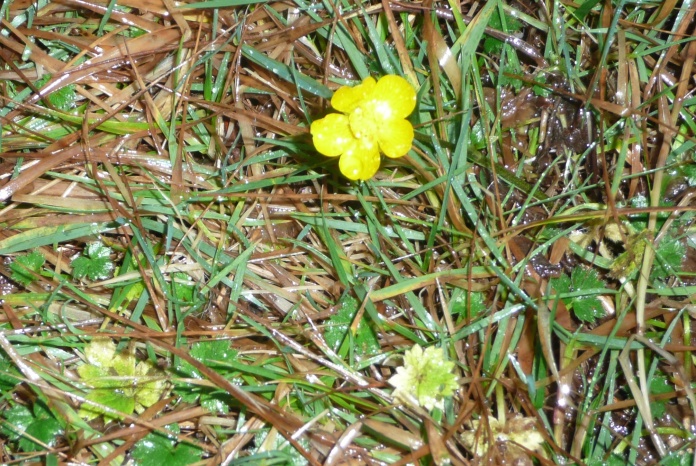 When one of my children got a fever she would rush about randomly picking things up and putting them down and talking too much (quite sweet but scary); we knew if we didn’t cool her down she would have a convulsion; the more energy you put into a system the faster it goes — even a little girl.

The weather has been like that.  As things warm up the system speeds up – the winds whizz around the globe picking up more moisture and dumping it in ever increasing amounts.  The winds blow faster – the whole thing gets unstable (from a human point of view).

In fact, I suppose, nature is doing what nature does best — she is resisting change – using all that extra energy to blow and suck and push and pull – to evaporate the seas and to lift the sodden air and swirl it around to generate static electricity and throw lightning around the heavens melting telephone lines in Wales and flooding the low-lying areas of most of Britain. 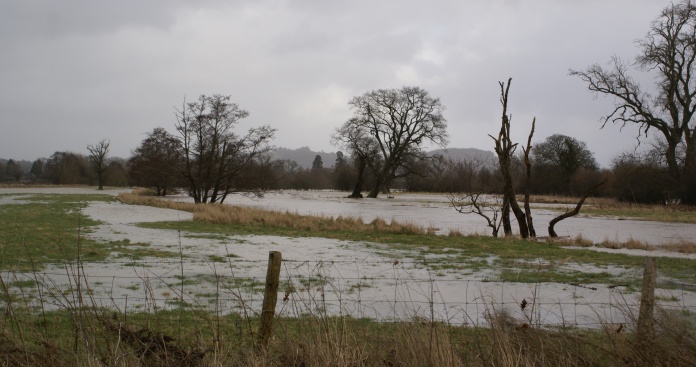 We live in the Cambrian Mountains of Wales which are not really mountains at all — they are about the size of the Black Hills of Dakota, but green — very green and very wet.  We have an epic amount of rainfall all the year round, except perhaps in April, if we are lucky.  A consequence of this is not that we have webbed feet but we do cope with it quite well.

When we arrived here we were amazed by the amount of attention lavished upon the ditches and culverts.  Yesterday I checked the grill on the drain by our gate, to dig away any silt or blockages — it was pristine and in the hedge nearby was a fresh pile of mud,gravel and dead leaves — the drain-fairy had been there before me!

Here are the gathering grounds of the rivers Severn and the Wye.  The little river Cerist feeds the Severn and here the Severn has plenty of room to expand:

The head-waters of the Severn are also regulated by the Clywedog Reservoir which can hold back huge amounts of water.

But the reservoir is nearly full, it has been raining and snowing incessantly for weeks and it is warm so the snow has melted, the ground is waterlogged and now the melt waters are just pouring off the hillsides.

The muddy water fills the ditches, overflows and runs down the roads – the roads flow, waterfalls appear everywhere.

Streams that normally trickle are tumbling down every cleft and roadside brooks thunder towards the valleys, scaring the people and jumping the bridges.

What flat pasture there is, and there is not much, is disappearing–

Grazed only by mallard ducks.

It is snowing again today, the news is full of pictures of the floods on the Thames around London.  The weather forecast is for more rain and more snow for the next month and all this water is bound for England.