I made foolish promises to her at that time but I kept them! Here she is after her retirement bathed in evening light in the twilight of her days.

Last year she had her 8th and 9th lamb, both large (10lb and 11lb).  She is now 8years old and last year I wrote in my lambing record, after I’d helped her lamb in the open, ‘No fuss’.

My shepherding friends sing the praises of a young flock and tell me to cull the old ewes but that doesn’t seem fair if they are healthy and productive and easy to handle so I stick to my guns.

Today was Number Thirty’s due date and, sure enough, she took herself off after lunch to the top of an otherwise empty field but, oddly, she was making a lot of noise — not a labour type baa (some of them are quite noisy, just like some women, but she isn’t usually one of those).  Nor was it a bubbly, talking to a lamb baa — it was a loud calling baa (like when one sheep has crossed the stream and calls to the others to come too.

I went up and sat in the sunshine on the bank and she quietened.  After 20 minutes or so I thought I’d go and get the evening feeds ready but as I walked down the hill she started calling again so I went back, and she stopped.  It seemed she wanted me there — don’t ever tell me sheep aren’t intelligent.

She laboured on but things did not seem to be progressing as they should despite strong and prolonged contractions.  Alan came and took one look and went off to put on his waterproof trousers.

I caught her during a contraction and could feel the two front feet and the muzzle with a swollen protruding tongue, the lamb was moving but huge and it didn’t want to budge.

Alan got back and we caught her again easily and this time he held her and I heaved, holding so tight to the hooves that I thought I might damage them and easing the head out.  The feet kept slipping from my grasp and I had forgotten to bring a towel.  I pulled off my T-shirt and dried the legs with it then used it to hold them.  She contracted, Alan urged her on, I pulled with all my might and at last could feel it coming — the legs extended, the head was free and shoulders were born and with a slither and a gush of orange, meconium stained liquor the mighty leviathan arrived – one ear up and one ear down but breathing.

I laid it down by its mother’s nose and though prostrate with exhaustion and still will an Alan around her neck, she licked its muzzle and it gave a little bleat and she gave her bubbly baa.

Half an hour later Alan had gone to the pub and the  lamb was all spruced up and had had a feed and Number Thirty was as lively as anything and in no hurry to re-establish the normal distance between the species.  She had her supper while I (in a clean top) weighed the monster — 14 lb.

We sat for a while on the steep bank — ewe, lamb and shepherd. Two farm trucks came down the lane which is on the other side of the little valley overlooking our field.  The first flashed its lights and the second honked its horn and wound down the window and waved. I don’t know who they were but they were acknowledging a special moment that they recognised. 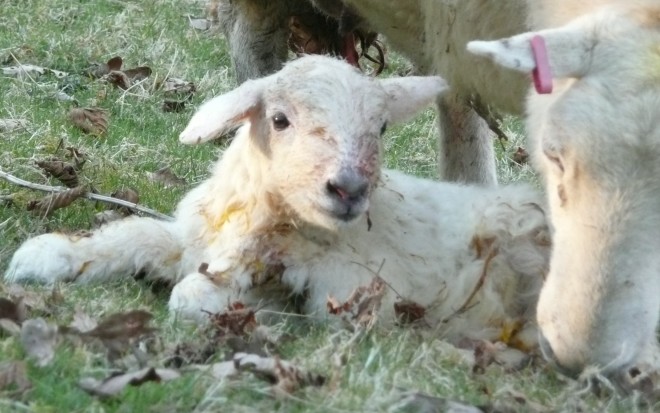 Lesson learned: next year I really must get them scanned so as not to overfeed the singletons.