It is exciting to discover the unexpected — that’s the marvel of Wales.  You can walk over a hill and stumble into the unexpected –not an upland bog but a Roman hill-fort,  a medieval rabbit warren, a bronze age settlement or simply an unbelievable view.  Often there is nothing on the map — many minor ancient monuments remain unknown or long forgotten.

Yesterday my daughter and I went to explore the Dysynni Valley where we knew there was a magic castle, now ruined, in what my daughter described when we got there as probably the most beautiful place she has ever been.  There is a sign from the road and a single information board at its entry which is a wooden kissing gate with no fasten, no attendant, no charge and no sign of any other visitors although we did come across two elderly couples coming down the path as we walked up.

Castell-y-Bere was built by Prince Llewelyn ab Iorwerth (the great) in the 1220’s, it was captured by the English under King Edward I, from Llewelyn’s grandson (Llewelyn ap Gruffudd — pronounced Griffith– and not so great) in 1282 and later abandoned by the English after a considerable battering and a fire in about 1294 at the hands of Madoc ap Llewelyn.  It was never very practical as it could not be supplied by sea.

The approach through trees

The views are stunning.  There is a wide flat valley where one can imagine the sea coming into the estuary and washing the lower ramparts  and breaking against the nearby tall sea cliffs — but this was not the case —  the sea had long gone even then but the birds that nested on this rocky coast have always remained.

View to North from Castle

View to the South

Yesterday, as we looked up at Craig yr Aderyn, Bird Rock, towering nearby, there was only one thing we bold explorers could do in the spring sunshine perfumed by may blossom  — we had to climb from the castle mound to the top of the ancient sea-cliff to look down.

We passed not a single human, there were no signs and no restrictions, only one love-lorn chaffinch singing most beautifully to its mate in the tree above and so absorbed that he was oblivious to us and our dog.

Further up the path the hardy sheep were not so amenable, they stamped their feet aggressively at Pedro on his best behavior and on a lead and when one of these ginger-footed psycho-sheep found itself separated from the rest it squawked like  the eponymous creature of the rock…  Then lost its nerve and ran behind an outcrop to hide. 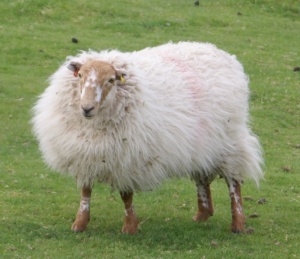 After an 850 foot climb we were on top of the world, looking down.  We saw the sun sinking  towards the sea in Cardigan Bay — a bird’s eye view of the valley. 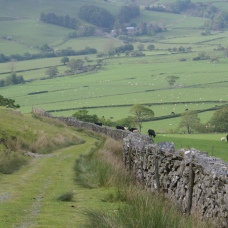 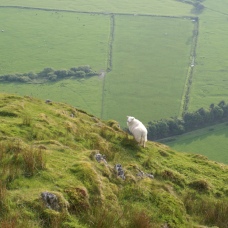 To the West and the low sun

Cormorants stand on the highest outcrops of the cliff face stretching out their wings to dry in the evening sun, this is their only inland nesting site in Wales.  We can look down on circling gulls and strain our eyes to pick out the red beaks of the choughs (pronounced chuffs — shiny black crows with finger-tipped wings, red down-turned beaks and red legs). This is one of their rare nesting sites, a place where the sheep graze down the sward and no-one kills the insects — just how they like it.  Here they wing their way around the crags throughout the year having aerial skirmishes with gulls and swooping down to bounce off the side of the steep hill.

As we came down, picking our way over a bank of stones which meanders around the side of the summit farthest from the valley we remarked that it looked like a fallen dry stone wall, but then there were two larger mounds of haphazard stone — perhaps not entirely haphazard —  we can see courses, still just discernable in the heap — a tumble down watch tower perhaps — there you go again —

first footprint in the sand…  Turns out there were two — towers, not footprints!.