Pedro, our dog, ought to have his own blog (not a weblog but a doglog — a glog), but then maybe no-one would ever visit mine.  His posts already get all the likes and comments.

When we first moved to Wales, when he was still young and intact and the world was full of willing bitches, Pedro was irrepressible, unrestrainable, clever (he still is) and devious (that too).  He earned us the reputation of the feckless English who could not even control their own dog. In this farming area he should have been shot; you can’t have big, powerful dogs just wandering about: dogs will always be dogs.  The thing was he didn’t just wander; he had purpose and inherent cunning.  He was never seen anywhere near a sheep, although he regularly crossed their fields, he always kept out of sight, a commando — along the stream or in the ditch.  There were no give-away signs of the sheep gathering or running, they didn’t even smell him. While bitches wailed in disappointment angry farmers locked him in barns only to be bedazzled by his escapology; he is always very biddable when caught, it’s a fair cop, chwarae teg in Welsh; he can speak Welsh and do door handles, knobs and latches.  One farmer is still scratching his head, like Sherlock Holmes: you see both doors were locked from the outside and the only window was a good twelve feet from the ground; I’m told he’s taking holy orders, the farmer, not Pedro.

It was pure charisma that kept him alive; he would boldly approach the man with the shot-gun, wagging his tail, as if he’d known him for years.  Perhaps he had licked his face one night recently when he lay drunk in the hedge while trying to get a bit of shut-eye on his way back from a lock-in at the pub.  Perhaps the farmer recognised in Pedro his own younger self; they do say that the Welsh (careful) are a passionate race and have their own traditional ways of courting, not dissimilar to Pedro’s. Anyway he survived and I have written about his adventures elsewhere.  I’ve never known anyone, human or otherwise, who knows so many people.  He’s a dog who comes home, after a night out, in the post van (You know how postmen feel about dogs).  The postman lets him out at the gate and he trots home. We benefitted indirectly from Pedro’s fame; farmers know a good dog when they see one, even if he is with that damn silly English couple.  When introduced to us at chapel they would say, ‘Oh yes, Pedro’s people.’ 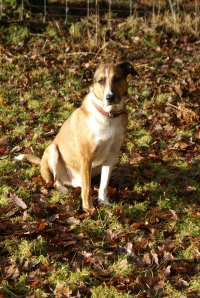 But all that changed when something happened down the valley, news of it drifted up on the wind, came through the key hole and under the door, Pedro sniffed, he trembled, he whimpered… To be continued.