I wasn’t born to be a sheep dog — more of an urban animal really — bit of a Jack-the-lad, I suppose.  Not a yobbo — urbane, they say — I’ve been to the theatre twice — outdoor, don’t you know — I’ve seen Hamlet!

Sheep Dog or what?

I’m a Generic Hound, sometimes called an Original Dog, with nothing added and nothing taken away — they haven’t nibbled away at my genome (that’s what I’m told by my friend, the geneticist), I came with all my natural potentiality then just had to find a niche — that’s where I live now — in my niche.

Supervising Shearing at the Niche, thanks to Peter Jenkins for the picture (all rights reserved).

It suits me, I like the out-door life and the rain and if you have a good brain and understand their lingo (human’s that is, despite their undoubted intelligence, sheep have little conversation) it’s not difficult.  One starts by just ‘helping out’ a bit and before you know it you’re on ‘One Man and His Dog’, except that she’s One Woman and, quite honestly, there is very little chance of us attaining celebrity because of her, what shall I say, declining powers.  I can understand  her perfectly but she doesn’t always think situations through or, indeed, even close the right gates, but we muddle along.  It’s not that she doesn’t understand me, one flick of the eyes and she knows exactly what I mean but she’s wilful — thinks she knows best and, to be honest, since the operation I really can’t be bothered to assert myself.

Aby helps, she’s my ward, I raised her from  a new-born lamb when she was orphaned and had to live in the new wet-room, then the kitchen — she’s the only creature that I’ve ever allowed in my basket.  Not now — she’s got very big and clumsy but she still talks a lot, much more than the other sheep.  She’s had lots of lambs of her own now but none of them are quite like her.  We have a soft spot for each other, she and I, she lets me lick her new lambs which the others would never do — they stamp their petulant little feet and I wouldn’t mess with any of them.

Aby with her 2012 lamb who is called Eighty-one and will be having her own lamb in April. 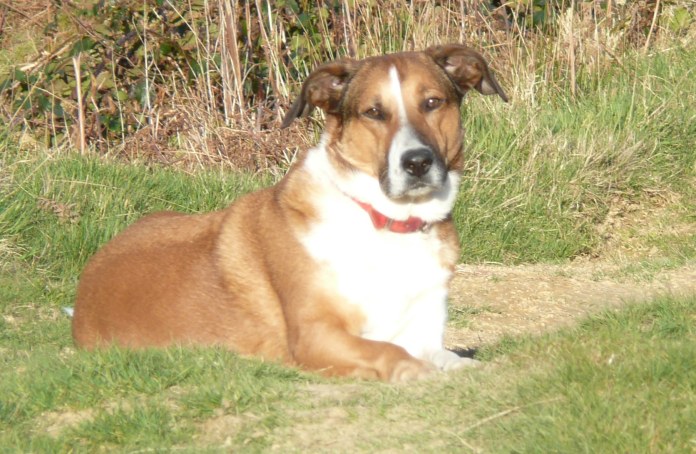 I do most of the remembering, I’m the time keeper, I know when things should be done, and I deal with security and pest control — I manage the cats and catch the adult rats (they really only cope with the young ones).

Protecting Boss from pesky cat (demonstrating sophisticated emotion). Jealous dog — they do PhDs in that.

It’s not all work, I have holidays, mainly beach retrieving holidays.

Here I am in Ireland. 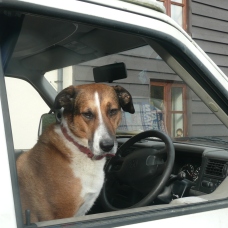 Setting off for Devon

Wishing you all the best for 2015, Pedro